PARIS 6 October 2016 (VCHR) – 54 prominent religious and civil society organisations in Vietnam, the USA, Europe and Asia have sent an Open Letter to the President of Vietnam’s National Assembly, Ms. Nguyen Thi Kim Ngan, calling for the revision of the Draft Law on Belief and Religion which should be voted by the National Assembly at their upcoming session (20 October – 18 November 2016). The signatories say the law is seriously flawed, and call for a revised text to be drafted in consultation with religious organisations and international legal experts “to ensure that the law protects the right to freedom of religion or belief in line with article 18 of the International Covenant on Civil and Political Rights (ICCPR)”.

“This law, if adopted in its current form, will put a straight-jacket on religions” said VCHR President Vo Van Ai, one of the letters’ co-sponsors. “It legalises government interference into all aspects of religious life, and rejects the very existence of organisations which cannot, or do not want to register with the State. This is against the very principle of freedom of religion or belief enshrined in the ICCPR, to which Vietnam is a state party”.

This is the first time Vietnam will adopt a law on religion and belief. Until now, religions have been regulated by a series of ordinances and decrees. Previous versions of the draft, which were circulated to religious communities for comment by the Government Committee for Religious Affairs, sparked off strongly critical reactions. However, the current text has taken no account of the religious communities’ concerns. Moreover, apart from the Catholic Church, which has a special status in Vietnam, only State-recognised or State-sponsored religious bodies were consulted, not independent organisations such as the Unified Buddhist Church of Vietnam (UBCV) and non-recognised Christian, Cao Dai, Hoa Hao and Khmer Krom Buddhist communities. 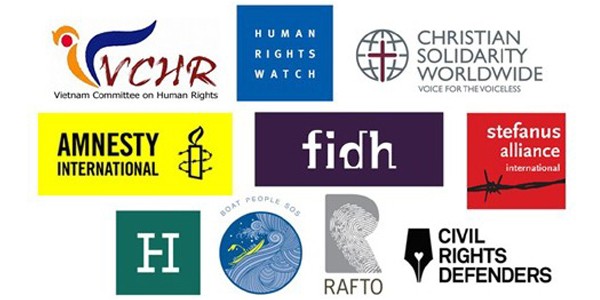 We, the undersigned civil society organizations, are writing to express our concerns about the proposed Law on Belief and Religion in Vietnam. The draft law, which has been revised several times and drawn strong criticism from many religious communities, is expected to be voted into law by the National Assembly at its session in October-November 2016.

As mentioned above, the draft was circulated to certain religious communities for comment. However, one Catholic body also objected to the short time, from 18 to 30 August, given for preparing their response to the draft law (1). Furthermore, independent religious groups not registered with the government, such as the United Buddhist Church of Vietnam, were not consulted.

There have been some welcome improvements made in the draft law, including provisions for the right to change one’s religion, as well as to follow or not follow a religion, the right of some detainees “to use religious books and manifest their belief or religion”, and the right of religious organizations to participate in activities such as education, vocational training, medical care and social and humanitarian assistance.

Nevertheless, the recommendations below have emerged from some of the particular concerns expressed by religious communities in Vietnam, which are shared by the undersigned organisations.

1. The definition of a religion should be made consistent with Article 18 of the International Covenant on Civil and Political Rights (ICCPR).

In the current draft, a religious organization has been defined as “a group of people … which is recognized by the government” (our emphasis) (Article 2.13). This leaves members of religious organizations who cannot or choose not to register with the authorities in a legal limbo, with no legal safeguards for conducting religious activities.

2. Registration with the government should not be made a pre-requisite for the exercise of freedom of religion or belief.

The onerous and complex registration process requires approval from the authorities for religious activities, operations and status as an organization. The guarantees outlined in Article 18 of the ICCPR are independent of and cannot be conditioned on any domestic process of notification, authorisation, recognition or registration.

3. The law must not allow officials to arbitrarily interfere in the internal affairs of religious organizations.

Provisions in the law allow the authorities to interfere excessively in the internal decisions, appointments, training, teachings and programmes of religious organisations. Limitations on the manifestation of freedom of religion or belief must never exceed in either purpose or scope those permitted in article 18(3) of the ICCPR. As the UN Special Rapporteur on Freedom of Religion or Belief, Dr. Heiner Bielefeltd, said after his visit to Vietnam in 2014, “…registration should be an offer by the State but not a compulsory legal requirement.”

4. Ambiguous and potentially discriminatory language should be removed.

The draft law contains ambiguous language regarding “good traditional cultural values” (Article 10.1) and “sowing division” (Article 5.4), that could be used to discriminate against ethnic and indigenous minorities, independent groups and those whose religion or belief is seen as “foreign” (Article 2.12).

5. Provisions should be made to establish legal channels and mechanisms for people to file complaints, and have those complaints independently investigated and acted on, in cases of alleged violations of the right to freedom of religion or belief.

For these reasons, we strongly urge that the law be revised, in consultation with religious community representatives, including those of non-recognized religious communities, and experts in international human rights law, to ensure that the law protects the right to freedom of religion or belief in line with article 18 of the International Covenant on Civil and Political Rights.

We look forward to hearing from you about this important matter. Please reply to the VCHR coordinator Penelope Faulkner at penelope.faulkner@gmail.com or the CSW coordinator Benedict Rogers at benrogers@csw.org.uk.

Former US Congressman Joseph Cao
Chairman, Coalition for a Free and Democratic Vietnam