Home / Resources / Others / Does Vietnam have carte blanche for crackdown on dissent?

Does Vietnam have carte blanche for crackdown on dissent?

Human rights advocates are expressing concern over an intensified crackdown on dissent in Vietnam. Some analysts suggest that the Communist regime is emboldened by perceptions that it is a strategically vital bulwark against China’s sharp power in the region.

By making a rare second trip this year to Vietnam, Defense Secretary James Mattis is signaling how intensively the Trump administration is trying to counter China’s military assertiveness by cozying up to smaller nations in the region that share American wariness about Chinese intentions, The South China Morning Post reports.

The authorities of Thanh Minh Zen monastery in Ho Chi Minh City recently expelled Thich Quang Do (above), a well-known human rights activist and supreme patriarch of the Unified Buddhist Church of Vietnam (UBCV). As a result of his commitment to religious freedom and democracy, Thich Quang Do was under house arrest since 2003 and subject to strict regime surveillance, Asia News reports. 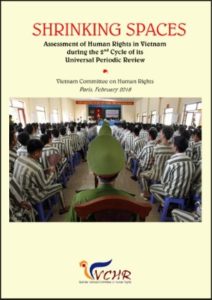 The International Buddhist Information Bureau (IBIB) said that the 91-year-old patriarch had been asked on Sept. 15 to leave the monastery by its superior monk Thích Thanh Minh as his presence had become a distraction to the daily operations of the monastery. Speaking to RFA’s Vietnamese service, IBIB director Vo Van Ai explained the various difficulties that the intrusive police presence caused the monastery during the patriarch’s house arrest.

“People don’t want to visit the monastery because they are afraid of being monitored by the police. They even took pictures of everyone visiting the monastery,” Vo said. Life inside the monastery had been “just like a prison” for the elderly patriarch.

In a letter to U.S. Ambassador to Vietnam Daniel Kritenbrink, U.S. Congressman Alan Lowenthal explained, “The Patriarch left the Thanh Minh Zen Monastery … and was only able to take with him three Buddhist monk robes. From September 15th to October 5th, Patriarch Thich Quang Do was “homeless” and had to stay at various monasteries throughout Saigon. On October 5th, the Patriarch boarded a train back to his ancestral hometown in Thai Binh Province, northern Vietnam. His current health and well-being are unknown and communications with the Patriarch have been cut off. I am deeply concerned with Patriarch Thich Quang Do’s current conditions.”

A Vietnamese citizen journalist who in September was sentenced to four years in prison for “disrupting the public order” has seen his sentence grow to nine years after being convicted on other charges, RFA adds:

Defend the Defenders reported on October 12 Do Cong Duong (left) was sentenced Friday to five more years on the charge of “abusing democratic freedom” under Article 331 of the country’s 2015 Penal Code. The NGO affiliated with Reporters Without Borders said that just as in the first trial, Duong’s relatives were not allowed to observe the second trial from inside the courtroom at the People’s Court of Bac Ninh Province.

The regime has also attacked “the Lady Gaga of Vietnam” (see below), who has traded in the trappings of fame to push for human rights and creative expression, CNBC reports.

“I used to be a pop star,” Mai Khoi says in her presentation told the Oslo Freedom Forum this September. “I had a lot of fans, shows and money.”

“Facebook has been a huge force for freedom in Vietnam, but this positive effect is now being reversed as the social media platform is delivered to authoritarianism,” she writes.

Vietnam is ranked as “not free” by Freedom House, the democracy and human rights watchdog.

Observers of contemporary Vietnamese politics are speculating that human-rights violations and the suppression of dissent will mark the legacy of President Tran Dai Quang, analyst Heather Stur writes for The National Interest:

Quang assumed the presidency in 2016, and prior to that, he had led the Ministry of Public Security, which includes Vietnam’s secret police and intelligence agency. According to the BBC, Quang was a “loyal and committed communist party member and known for his hard-line approach to dissent. Scores of dissidents have been jailed under his leadership.”

Vietnamese authorities have repeatedly targeted, harassed, and detained Thich Quang Do both for practicing his faith and for his tireless advocacy for religious freedom and related human rights, says the United States Commission on International Religious Freedom (USCIRF):

For example, in 2001, he launched a plan called “Appeal for Democracy in Vietnam,” which was supported by more than 300,000 Vietnamese from different faith backgrounds, as well as international stakeholders. As a result, the government placed him under administrative detention without trial at Thanh Minh Zen Monastery and prevented him from receiving medical treatment despite suffering from diabetes.

Thích Quảng Độ has been nominated 16 times for the Nobel Peace Prize, notes the Vietnam Committee on Human Rights & Quê Me: Action for Democracy in Vietnam. In November 2015, 91 international personalities, including four Nobel Peace Prize laureates, signed a letter to US President Obama calling for his release. Thích Quảng Độ was awarded the Rafto Memorial Prize by the Norwegian Rafto Foundation in 2006 for his role as a “unifying force” and a “symbol of the growing democracy movement in Vietnam”, the “Democracy Courage Tribute” by the World Movement for Democracy in 2006, and the “Homo Homini” Prize by the Czech Foundation People in Need 2003, under the auspices of the late President Vaclav Havel.