PARIS-BRUSSELS, 14 April 2015 – In her draft recommendation adopted on March 26, 2015, the EU Ombudsman found that “the Commission’s failure to carry out a specific human rights impact assessment in relation to Vietnam, constitutes maladministration.” She recommended that “the Commission should now carry out such an assessment without further delay”

The EU Ombudsman assessed a complaint filed by FIDH and VCHR following the European Commission’s refusal to take human rights into account in negotiations for trade and investment agreements with Vietnam and concluded that the complaint was well-founded.

In their complaint, FIDH and VCHR recalled that EU policies require that a Human Rights Impact Assessment (HRIA) be conducted before a Free Trade Agreement can be signed with a third country. The European Commission has refused to conduct the obligatory HRIA on Vietnam on the basis that a partial assessment was made in 2009. 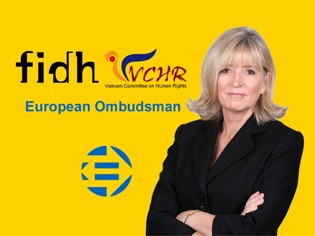 The Ombudsman responded that a partial assessment that covers only certain aspects of the impact on social rights cannot be considered as a proper substitute for a HRIA. Also, the Ombudsman noted the persistent silence of the European Commission towards the lack of HRIA for the investment component and the Investor-state Dispute Settlement mechanism (ISDS). She rejected the Commission’s argument that, given the far advanced state of the negotiation process, carrying out a HRIA would have “unjustifiably burdensome and disproportionate” effects. Noting that “respect for human rights cannot be made subject to considerations of mere convenience,” the EU Ombudsman stated that “as the complainants correctly pointed out, what is decisive is […] to ensure that the FTA with Vietnam, which is still being negotiated, will have no negative impact on human rights”.

In her Decision, the Ombudsman concluded that the “EU institutions and bodies must always consider the compliance of their actions with fundamental rights and the possible impact of their actions on fundamental rights” and that the EU should “not only ensure that the envisaged agreements comply with existing human rights obligations and do not lower the existing standards of human rights protection, but it should also aim at furthering the cause of human rights in the partner countries”. In that vein, the Human Rights Impact Assessment (HRIA) should allow the commission to asses if the “FTA complies with existing human rights obligations and standards and will have no adverse effects on human rights” and to define the “appropriate measures which would ensure that no such adverse effects would occur”.

“This recommendation is an important precedent on several issues” said Karim Lahidji, FIDH’s president. “Beyond the case of EU-Vietnam negotiations, it challenges the lack of HRIA on ISDS and investment agreements or components currently negotiated, like with Burma, China, Jordan, and the US. It insists on the need to conduct proper HRIA and cease the practice of only assessing certain social aspects. It recognizes that HRIA should lead to concrete and efficient measures to ensure that the EU respects human rights, does not lower the existing standards of human rights protection, and ensures that trade and investment agreements will not adversely affect human rights. It rejects the Commission’s well-known argument that the human rights clause and human rights dialogue can be seen as sufficient measures on their own”, he added.

Vo Van Ai, President of the Vietnam Committee on Human Rights (VCHR) declared: “The EU Ombudsman’s recommendation is an important step forward for human rights in Vietnam. Without this crucial human rights impact assessment, the EU-Vietnam Free Trade Agreement would enable Vietnam to reap significant commercial advantages from the EU whilst suppressing its citizens’ and workers’ rights with impunity”.

Negotiations on the EU-Vietnam Free Trade Agreement are taking place against a backdrop of intensifying repression in Vietnam. In a fierce crackdown on freedom of expression, Vietnam prosecuted and imprisoned at least 65 bloggers and activists in 2013. At least 16 more were arrested or sentenced in 2014. Scores of civil society activists were brutally beaten for staging peaceful demonstrations, and hundreds of dispossessed farmers were wounded in massive protests over forced eviction and land confiscation.

International trade and investments can have both positive and negative impacts on human rights. Past experience has shown that, in the current state of affairs, international trade and investment rules have tended to undermine the protection and realisation of human rights. This is of particular note in developing countries with regard to access to medicine, access to water, rights of indigenous peoples, rights to an adequate standard of living, adequate housing, food, health and education, participation, labour rights and the right to work, peaceful gathering, etc.

In the negotiation of such agreements, FIDH and the VCHR have consistently called for human rights to be fully integrated within the framework of trade and investment. In particular, conducting human rights impact assessments would enable the EU to prevent negative human rights impacts. This recommendation is endorsed by multiple stakeholders including several UN Special Procedure reports, studies and analyses.

Since the Lisbon Treaty, the EU has a legal obligation to ensure that the trade agreements it implements are not harmful to human rights abroad. The EU is gradually progressing in its use of HRIAs, and has included them in its recent negotiations on free-trade agreements with Armenia, Tunisia and Morocco, but not in all, and not in a way that secure the EU really comply with its obligations.

While FIDH and the VCHR repeatedly called for the inclusion of a HRIA of the currently negociated trade agreement with Vietnam, the European Commission consistently refused. The organizations’ last resort was to seek the intervention of Ms Emily O’Reilly, the EU Ombudsman to modify the practice.

The European Commission has until June 30, 2015 to take its position and explain how it intends to implement the Ombudsman’s recommendations.

The opinion of the Ombudsman could have a significant impact on the establishment of human rights impact assessments beyond the negotiations with Vietnam, and be echoed in the ongoing negotiations with the USA, China, Burma or Jordan.