— having regard to its previous resolutions on Vietnam,

— having regard to the statement by the Presidency on behalf of the European Union on 15 May 2007 on the jailing of human rights activists in Vietnam,

— having regard to the Cooperation Agreement of 1995 between the European Union and the Socialist Republic of Vietnam,

— having regard to the International Covenant on Civil and Political Rights, ratified by Vietnam in 1982,

A. whereas, since March 2007, more than 15 dissidents have been sentenced to lengthy periods in prison or under house arrest,

B. whereas this repression comes one year on from the political opening-up of 2006, which saw the birth of independent and democratic parties, and many Vietnamese (intellectuals, lawyers, journalists, artists, priests and individuals) have expressed an interest in the democratic cause and there have been numerous calls for democracy,

C. whereas the Internet petition for greater democracy, launched by the pro-democracy and reform group Bloc 8406 and signed by 118 campaigners, marks the beginning of a true online democracy movement,

D. whereas the Vietnamese regime’s tolerance of this spreading of democratic dissidence aroused great hope and enabled the Socialist Republic of Vietnam to join the World Trade Organisation, to be removed from the United States’ list of violators of religious freedom (the CPC list or list of countries of particular concern) and to be accorded permanent normal trade relations (PNTR) by the US Congress,

E. whereas, in spite of constant and repeated appeals from the international community, the Patriarch of the Unified Buddhist Church of Vietnam, Thich Huyen Quang (87 years old), and his deputy, Thich Quang Do (79 years old), winner of the 2006 Rafto Prize for human rights work, have been imprisoned without trial in their monastery since 1982 for the sole reason of being ardent supporters of religious freedom, human rights and democracy; whereas members of the provincial committees set up by the Church in 20 poorer provinces for the purpose of assisting the most deprived are subjected to harassment, interrogation, intimidation and ongoing threats, simply because of their connections with the Unified Buddhist Church of Vietnam,

F. whereas the recognition of religious movements by means of registration remains at a minimum and subject to inequalities with, for example, 50 recognised Protestant ‘house churches’ out of the 4 000 that have applied for recognition, and the registration of these congregations has to be renewed every year.

G. whereas, in February 2007, a demonstration by 200 Khmer Krom Buddhist leaders in support of religious freedom was suppressed by force in the province of Soc Trang; whereas five of these leaders were sentenced on 10 May 2007 for between two and four years’ imprisonment for ‘public order offences’ and the religious persecution suffered by the Khmer Krom is accompanied by forced assimilation,

H. whereas the ethnic minorities of the Northern and Central Highlands are still subject to discrimination, confiscation of their land and violation of their religious freedom, and only 38 religious groups are recognised in the north-east; whereas neither independent NGOs nor journalists have free access to the Highlands in order to assess the real situation of the Montagnards repatriated from Cambodia,

I. whereas all the dissidents detained since March 2007 have been arrested for breaching of ‘national security’ legislation, for ‘propaganda against the Socialist Republic of Vietnam’ (Article 88 of the Penal Code) or for attempts to ‘overthrow the government’ (Article 79); whereas the charges on the grounds of ‘national security offences’ have been judged incompatible with international law by the UN Human Rights Committee, by the Special Rapporteur on religious intolerance and by the Working Group on Arbitrary Detention, which have all called for them to be overturned or revised,

J. whereas Vietnam receives financial assistance from the European Union and its Member States under the ‘Legal System Development Strategy’ and the ‘Judicial Reform Strategy’,

K. whereas Vietnam continues to hold trials with no respect for presumption of innocence, the rights of the defence or the independence of judges, as shown by the trial of the Catholic priest Nguyen Van Ly (30 March 2007), Nguyen Van Dai and Le Thi Cong Nhan (11 May 2007),

L. whereas the repeal of Decree 31/CP of 1997 on administrative detention cannot mask the continued application of Ordinance 44/2002/PL-UBTVQH10 on Sanctions against Administrative Violations, which extends the scope for detaining dissidents without trial and resumes the old and sinister practice of placing dissidents in psychiatric hospitals, a fate that has befallen the lawyer Bui Thi Kim Thanh, who has been held since November 2006 for having helped defend the rights of peasants who had been unfairly treated,

M. whereas the European Union is Vietnam’s main trading partner and Vietnam already benefits from the Union’s system of generalised preferences (SGP),

N. whereas, in March 2007, the Commission decided to increase aid to Vietnam by 30% for the 2007-2013 period (EUR 304 million), which is largely earmarked for governance and human rights actions,

1. Voices its deep concern at the new wave of persecution of dissidents in Vietnam;

4. Calls on Vietnam to carry out political and institutional reforms in order to establish democracy and genuine rule of law, beginning with the introduction of a multi-party system, a free press and free trade unions;

5. Calls on the Vietnamese Government to respect religious freedom and to restore the legal status of all religious communities, including the Unified Buddhist Church of Vietnam;

6. Asks the Vietnamese Government to put an end to the discrimination against the Montagnard community;

7. Welcomes the repeal of Decree 31/CP as a first step in the process of judicial reform and calls on the Vietnamese Government to abolish all forms of imprisonment without judicial safeguards, in particular Ordinance 44 of 2002;

8. Calls on the Vietnamese authorities to implement the UN recommendations, in particular those of the Human Rights Committee in its conclusions of 2002, by repealing all legislation in breach of human rights and by genuinely guaranteeing the fundamental rights of the Vietnamese people, in line with the International Covenant on Civil and Political Rights and the International Covenant on Economic, Social and Cultural Rights;

9. Stresses that human rights dialogue between the European Union and Vietnam must lead to tangible improvements in Vietnam; asks the Council and the Commission to reassess the policy of cooperation with Vietnam, bearing in mind Article 1 of the Cooperation Agreement of 1995, which states that cooperation is based on respect for democratic principles and fundamental rights;

Strasburg
July 12, 2007
Related Story :
l European Parliament condemns crack-down on dissidents and calls on Europe to reassess its policy of cooperation with Vietnam (12th July 2007)
Share
Previous During a visit from the Norwegian Ambassador, Venerable Thich Quang Do sets 4 conditions for Buddhist unification in Vietnam
Next Speaking out in public for the first time in 26 years: Thich Quang Do addresses farmers demonstrating in Ho Chi Minh City against power abuse and state appropriation of lands 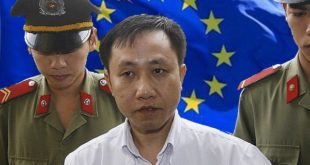