VCHR – Freedom of Religion or Belief in Vietnam: State Management of Religions 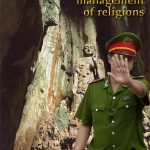 The VCHR report “Freedom of Religion or Belief in Vietnam: State Management of Religions.” analyses the new draft Law as well as other religious legislation in Vietnam, and demonstrates that they are designed to impose state control and turn religions into tools of the Communist Party. Religious communities refusing to submit to its dictates risk harsh persecution.

The VCHR report contains an important section on Vietnam’s policy of “stealth repression” against non-recognized, independent religious organizations such as the Unified Buddhist Church of Vietnam (UBCV), or its affiliated “Buddhist Youth Movement”, which are subjected to pervasive harassments, travel restrictions, Police surveillance and economic sanctions. It described the case of UBCV Patriarch Thích Quảng Độ, 2016 Nobel Peace prize nominee, subjected to diverse forms of detention (internal exile, prison and house arrest) over the past 30 years on account of his peaceful engagement for religious freedom, democracy and human rights.

In its recommendations, the VCHR report called on Vietnam to withdraw the 5th draft Law on Belief and Religion and prepare a new draft that conforms to Vietnam’s obligations under Article 18 of the ICCPR, in consultation with religious and belief communities (both recognized and unregistered), international legal experts and the UN Special Rapporteur on FoRB. It called on the international community to ensure that bilateral relationships with Vietnam be dependent on measurable progress on freedom of religion and belief and human rights, and include specific provisions on the respect of these rights in trade agreements such as the EU-Vietnam Free Trade Agreement, or implementing legislation for the Trans-Pacific Partnership and other economic agreements to which Vietnam is a party. The report also urged the US to re-designate Vietnam as a “country of particular concern” for religious freedom violations as recommended by the US Commission on International Religious Freedom in their 2015 annual report.