Massachusetts High School Students speak out for Thich Quang Do 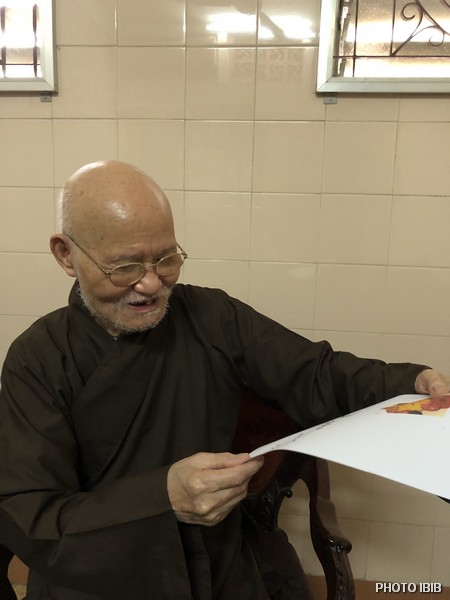 PARIS, 29th January 2018 (VCHR) – The Most Venerable Thích Quảng Độ, prominent dissident and Patriarch of the Unified Buddhist Church of Vietnam (UBCV) received an unexpected gift today at the Thanh Minh Zen Monastery in Ho Chi Minh City where he is under house arrest – a packet of cards, letters and drawings from high school students and members of the local community in Lexington, Massachusetts (USA) expressing support for his lifelong efforts for religious freedom and human rights. Since Thích Quảng Độ’s communications are monitored and censored by the communist authorities, the letters were sent through the Vietnam Committee on Human Rights and the International Buddhist Information Bureau to ensure that they reached Thích Quang Độ safe and sound.

“Hanoi has detained and isolated Thích Quảng Độ for decades, hoping that the world would forget him” said VCHR President Võ Văn Ái. “These touching messages prove that their heartless policy has failed. Thích Quảng Độ’s engagement for religious freedom and human rights has inspired young people across the globe. Their words are a source of hope and encouragement for all human rights defenders and civil society activists in Vietnam”.

These messsages of international solidarity for Thích Quảng Độ arrive at a time when human rights defenders, civil society activists and members of religious communities are suffering intense repression under one of the fiercest assaults in recent years on freedom of expression, association, assembly and religion in Vietnam. 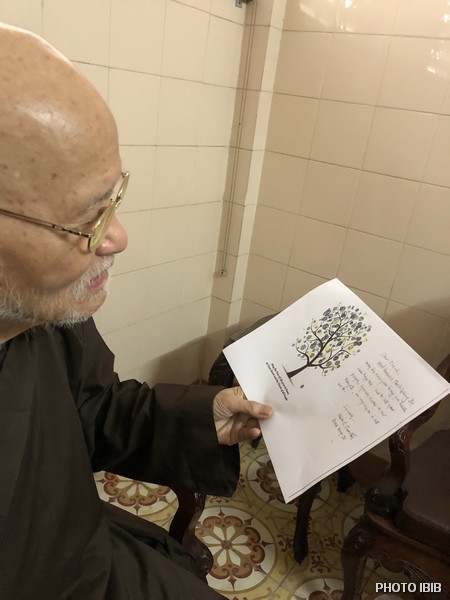 Thích Quảng Độ asked Võ Văn Ái to thank the students of Lexington High School, members of Amnesty International and community groups for their kind gesture. Below are extracts from some of the messages:

Lucie Nolden: “Dear Thích Quảng Độ, I am a student in the United States and I am writing to you to express my admiration for all of the work you have done. Your fight for religious freedom and human rights has been inspirational. It is awful that you have been imprisoned for the amazing work you have done. I just wanted to let you know that so many people support and admire you here, at my school, in my country and around the world. We will not rest until human rights abuses everywhere have ended and each person is treated with the respect and dignity they deserve. Thank you so much for everything you have done.”

Aradhna Johnson:  “Dear Mr. Quảng Độ, Thank you for all you have done for freedom of religion. The work you have done has not gone unnoticed. People will remember your bravery, passion and faith for ages. It is people like you who make a difference. It is people like you who inspire others to fight for what they believe in. Your dreams are shared with people all around the world, dreams of peace, equality and progress. All the work you have done has made a difference in our world and will continue to impact humanity through the ages.” 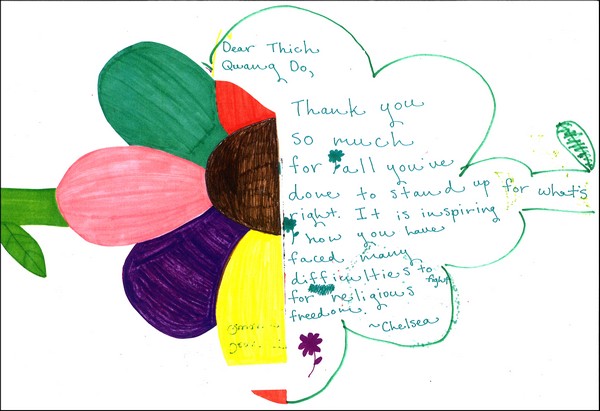 Lucie Chen: “Dear Mr. Thich Quang Do, I am a student in Massachusetts of the United States writing to thank you for all your work fighting for religious freedom. Because of your tireless advocacy, I am truly hopeful for the future as well as for mankind. You are incredibly inspirational, and a figure of hope for people everywhere. I hope this does not sound insincere. I believe in, and am grateful to you, and I fully support you and your efforts.”

Grace Abe: “Dear Thích Quảng Độ, Thank you so much for all the work you’ve done to advocate for religious freedom in Vietnam. Your defense of human rights over the years has been, and continues to be, incredibly brave and important. We fully support your efforts. Keep up the fight !” 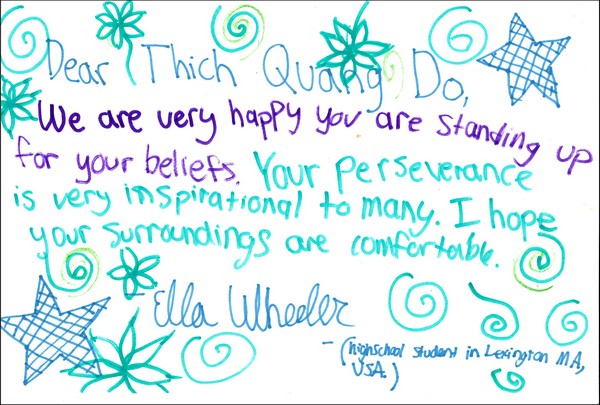 Ella Wheeler: “Dear Thich Quang Do, we are very happy you are standing up for your beliefs. Your perseverance is very inspirational to many. I hope your surroundings are comfortable.”

Jordan O’Hare Gibson: I hope this note finds you in good health. In today’s world it is good to hear about people like you who refuse to give in to tyranny and unjust government officials. I hope you continue the fight for justice.”

Chelsea, Liz, Leo, Oliver and many others sent messages, drawings and cards, as well as members of Amnesty International’s Group 56 in Lexington, including Alvin Jacobson, Edwin G. Cranston (Professor of Japanese literature at Harvard University), Bill Harris, Terry Kay Rockefeller (Documentary film producer), etc. Alvin Jacobson, who launched the initiative, said he had sent many letters to Thích Quảng Độ since his group adopted the UBCV leader as a prisoner of conscience in 2002, but very few ever reached him. 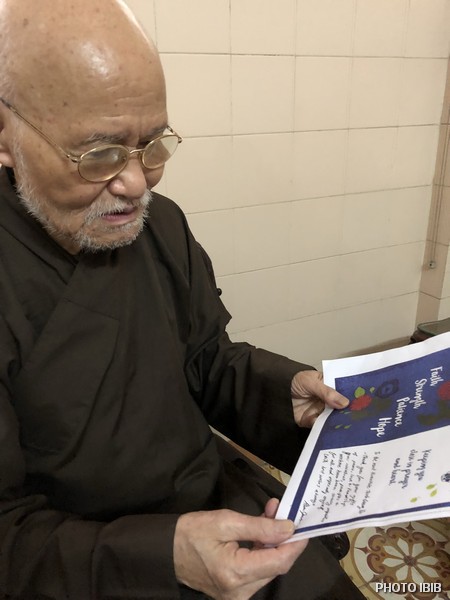 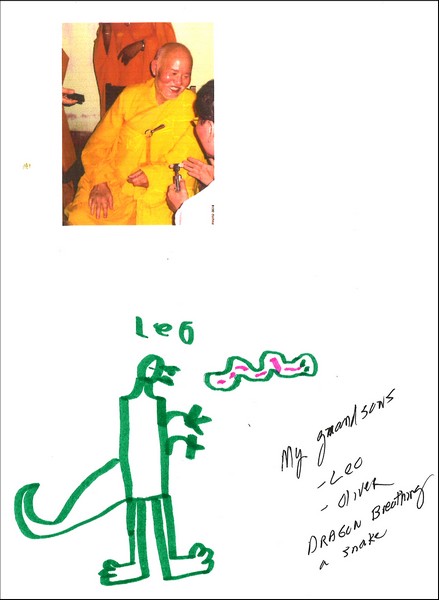 Thích Quang Độ, Patriarch of the independent Unified Buddhist Church of Vietnam (UBCV) has spent more than 30 years in prison, internal exile or under house arrest for his advocacy of human rights, religious freedom and democracy. Born in 1928 in Thái Bình Province (former North Vietnam), a monk since the age of 14, he witnessed the summary execution of his religious master by a revolutionary People’s Tribunal in 1945. Profoundly disturbed by this image, he resolved to devote his life to the pursuit of justice through the Buddhist teachings of nonviolence, tolerance and compassion. After Vietnam’s unification in 1975, he was amongst the first to denounce widespread human rights violations by the communist authorities and call for political pluralism, democratic freedoms and human rights. As a result, he was imprisoned, sent into internal exile for ten years, then imprisoned again, and finally placed under house arrest at the Thanh Minh Zen Monastery in Ho Chi Minh City (Saigon), where he remains today. He is a recipient of the Norwegian Rafto Prize for Human Rights Defenders and the World Movement for Democracy’s “Democracy Courage Tribute”. Thích Quảng Độ is also a scholar and writer. During his years in exile and prison, he translated an 8,000-page “Great Dictionary of Buddhist Terms” into Vietnamese, a work of erudition that has won overwhelming acclaim.

Previous Vietnam: Annus horribilis ends with more arrests and imprisonment
Next Letter of the Most Venerable Thich Quang Do to US Congressman Alan Lowenthal