In 2016, Vietnam continued to make progress to improve religious freedom conditions. While the government’s Law on Belief and Religion, approved on November 18, 2016, does not comply fully with international standards, the measure reflects the government’s and National Assembly’s good faith efforts to solicit input from some religious organizations, incorporate guidance from international experts in a relatively transparent fashion, and address myriad religious freedom challenges in the country. Nevertheless, severe religious freedom violations continued, especially against ethnic minority communities in rural areas of some provinces. Given the law’s approval late in the reporting period, its effective date of January 1, 2018, and the serious scope and nature of ongoing abuses during 2016, USCIRF again finds that Vietnam merits designation as a “country of particular concern,” or CPC, under the International Religious Freedom Act (IRFA) in 2017, as it has every year since 2002. USCIRF believes Vietnam may be on the right path toward comprehensive and enduring improvements in religious freedom conditions; continued positive movement along this path may prompt USCIRF to consider moving Vietnam to its Tier 2 list in the future. This possible change in tier status will depend, in part, on whether the Vietnamese government implements and enforces the new law in a manner that ensures the rights of religious organizations and individual believers, providing equal treatment and fairness to both state-sponsored and independent groups, as well as registered and unregistered groups…: 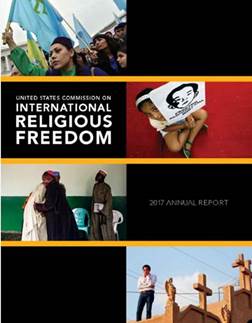