“Vietnam held Nguyễn Văn Đài and Lê Thu Hà in jail for two years before subjecting them to this gruesome mockery of justice” said VCHR President Võ Văn Ái. “Everyone feared that this trial would be unfair, but we hoped against all odds that Vietnam would change its ways. These hopes – and the future of these brave human rights defenders – were dashed today when these crushing sentences were announced”. 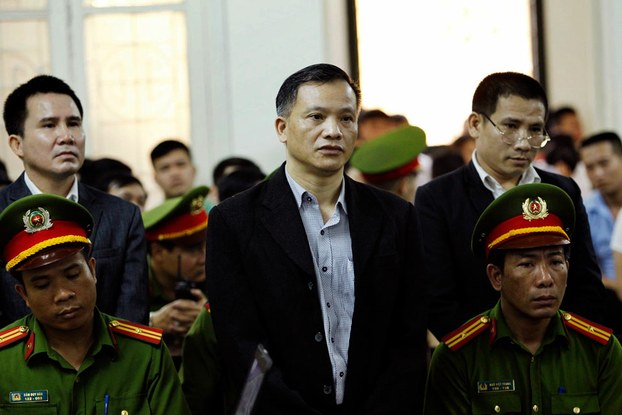 Võ Văn Ái called on the international community to take strong action in face of Vietnam’s systematic violations of its binding human rights commitments. In particular, he called on the European Union to freeze ratification of the EU-Vietnam Free Trade Agreement that is planned to be signed this year. Indeed, Nguyễn Văn Đài was arrested in December 2015 as he was about to meet EU diplomats in Hanoi for the EU-Vietnam annual human rights dialogue. “Vietnam cannot be allowed to repress its citizens with impunity. The international community should make it clear that it will not continue “business as usual” with Vietnam unless concrete human rights improvements are made, beginning with the release of Nguyễn Văn Đài and his colleagues”, he said.

The Paris-based VCHR also called on French President Emmanuel Macron to publicly condemn this outrageous verdict and insist that concrete human rights progress must be made before France develops its relationship with Vietnam. During the visit of Communist Party Secretary-general Nguyễn Phú Trọng to France last month, President Macron hailed Hanoi’s “important reforms to build the rule of law” and called for increased cooperation and commercial exchange.

Brotherhood for Democracy is an independent civil society organization that promotes human rights through online actions and coordinates the efforts of various pro-democracy actors in the country. Charges laid against them at their trial included advocating for the establishment of a free market economy and a democratic government, calling on international organizations to speak out against human rights violations, and giving legal support to dispossessed farmers and victims of the Formosa pollution disaster. The arrest of Nguyễn Văn Đài and his colleagues has been strongly denounced by the UN, democratic governments and civil society organizations worldwide.