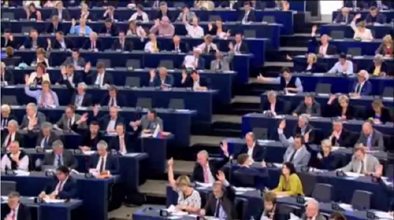 STRASBURG, 9 June 2016 (VCHR) – At its plenary session in Strasburg today, the 751-member European Parliament adopted an Urgent Resolution strongly condemning human rights violations in Vietnam, and the escalation of repression following the Communist Party’s XII Congress in January which brought a hard-line leadership to power in the country.

“This resolution was co-sponsored by 139 MEPs from six main political groups” said Võ Văn Ái, President of the Vietnam Committee on Human Rights (VCHR). “It shows that a large majority of MEPs from all across the political spectrum have had enough of Vietnam’s human rights abuses. They are not deceived by Vietnam’s cosmetic gestures of “progress” and can see that violating fundamental rights is a natural characteristic of the Vietnamese regime”.

Whereas Vietnam announced today that last month’s legislative elections (22 May) gave almost 96% of seats to the Communist Party, the EP Resolution notes that Vietnam “has been a one-party state since 1975, with the Communist Party of Vietnam allowing no change to its leadership and having control of the National Assembly and the courts”, and that independent political parties, labour unions and human rights organisations are banned in Vietnam” and there is no independent press.

During today’s debate, MEP Frédérique Ries expressed particular concern about the plight of Thích Quảng Độ: “We call for the release of all those who have been thrown behind bars, such as Thích Quảng Độ, leader and symbol of the Buddhist movement, who has been deprived of his freedom almost uninterruptedly for the past 34 years. He is 88 years old, Mr. President, and he is under house arrest in Saigon without any justification or charge. His health has seriously deteriorated. We urgently call upon [EU High Representative for Foreign Affairs and Security] Federica Mogherini to urge the European Commission and Council to use all the means at their disposal to obtain the release of Thích Quảng Độ and all other political prisoner.”

The Resolution denounced the violent suppression (May 2016) of nonviolent demonstrations in protest against the recent “ecological catastrophe that decimated the nation’s fish stocks” and the “wide-ranging police measures to prevent and punish participation in demonstrations” which resulted in grave human rights violations “including torture and other cruel, inhuman or degrading treatment and punishment”. The Euro-MPs condemned this widespread Police violence, and called on Vietnam to establish “effective accountability mechanisms for its police forces and security agencies”.

Taking up concerns expressed by Vietnam Committee on Human Rights and many international NGOs, the European Parliament called for the revision or abrogation of all legislation that restricts human rights, in particular provisions in the Criminal Code on “national security” or “abusing democratic freedoms”. They also expressed concerns about recently-adopted legislation such as the amended Press Law and the Law on Access to Information, and the draft Law on Associations and Law on Belief and Religion currently before the National Assembly which are incompatible with international human rights law.

The EP expressed particular concern on the situation of freedom of religion or belief, urging Vietnam to cease persecution of religious communities and amend legislation to re-establish the legal status of non-recognised religions such as the Unified Buddhist Church of Vietnam (UBCV) and certain Protestant house churches, notably those of the ethnic minorities. They called on Vietnam to withdraw the 5th draft of the Law on Belief and Religion and “prepare a new draft that conforms to Vietnam’s obligations under Article 18 of the International Covenant on Civil and Political Rights”.

Discrimination against women was also an issue of concern. The EP regretted that “domestic violence, trafficking in women and girls, prostitution, HIV/AIDS and violations of sexual and reproductive rights remain problems in Vietnam.”

Previous In Vesak Message, UBCV leader Thich Quang Do calls on Buddhists to be catalysts for democratic change in Vietnam
Next European Parliament resolution of 9 June 2016 on Vietnam

Cambodia/Laos/Thailand/Vietnam: Address enforced disappearances, deliver justice for the victims and their families