Thank you for giving the Vietnam Committee on Human Rights the opportunity to testify today.

Exactly 17 years ago, I was here in this same room, at the review of Vietnam’s second periodic report on the ICCPR. I raised my serious human rights concerns in an in-depth report. Many of these were taken up by the Committee in their Concluding Observations.

I am here today to present a new report. Unfortunately, it repeats many of my previous concerns, because many of the Committee’s recommendations were not taken into account.

The most urgent problem is that of « national security”. The government informed the Committee that the Covenant has primacy over domestic law in Vietnam. But in practice, the authorities have emptied the Covenant of its substance by it subordinating it to the Constitution, which conditions the exercise of human rights on the “interests of the state” and “national security”. This conditionality is included in all new laws adopted by Vietnam.

These vague, catch-all “national security” provisions are in fact a legal veneer to suppress human rights. They make no distinction between violent acts and the legitimate exercise of the right to freedom of expression, and transform peaceful human rights advocates into criminals. Under these provisions, despite the recommendations of the Committee in 2002, pre-trial detention may be prolonged indefinitely, and lawyers are obliged to denounce their own clients.

Recently, the number of convictions under Article 109 of the Criminal Code on “activities aimed at overthrowing the people’s government” have literally exploded, with two convictions in 2016, six in 2017 and 15 in 2018. This crime, which carries the death penalty, is used to sanction all advocacy of multi-party democracy and the separation of powers. For Vietnam, pluralism is synonymous with a threat to the existence of the Communist Party. Whosoever speaks out for pluralism is therefore guilty of “subversion”.

The Law on Belief and Religion violates Article 18 of the ICCPR. Religious freedom is a universal and inalienable right. Registration should be thus be optional, not mandatory, whereas this law protects only religious groups which are recognized by the State. Since the law came into effect, members of non-registered groups such as the Unified Buddhist Church of Vietnam (UBCV) have suffered increasing harassments, intimidation and detention.

Regarding the death penalty, although the number of crimes punishable by death has been reduced, the number of death sentences has significantly increased. The government announced that there were 122 more sentences in 2018 than in 2017. The total number of sentences and executions is unknown because they are classed by the government as “state secrets”.

Thank you for your attention. 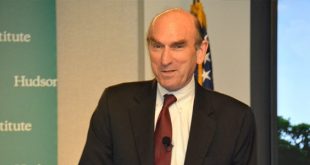 Speech by Elliott Abrams, Conference on Religious Freedom in Vietnam: Its Importance for Regional and Global Security (12 September 2016)