PARIS, 23 April 2007 (VCHR) – As high-level American and Vietnamese officials prepare to meet in Washington D.C. for the U.S.-Vietnam Human Rights Dialogue tomorrow (24 April 2007), the Paris-based International Federation of Human Rights (FIDH) and the Geneva-based World Organization against Torture (OMCT), released a groundbreaking report today on their very first mission to Vietnam. Mr Vo Van Ai, President of the Vietnam Committee on Human Rights and FIDH Vice-President welcomed the publication of the report, issued in the framework of the FIDH and OMCT’s joint programme, the Observatory of Human Rights Defenders. “This Report comes at a very significant moment”, said Vo Van Ai. “Just as Vietnam is launching a brutal crackdown to stifle all peaceful voices of dissent, the Report “gives the floor” to twelve human rights defenders met by the FIDH/OMCT mission in Vietnam, including Thich Quang Do, Thich Thien Minh, Thich Khong Tanh, Nguyen Dan Que, Father Chan Tin, Hoang Minh Chinh etc. Their testimonies shine a rare light on the daily realities faced by human rights defenders from all walks of life, and provides a precious tool in campaigns to alert international opinion to Vietnam’s total disregard of its international obligations to uphold its citizens’ fundamental freedoms and rights”.

Below is the full text of the Press Release issued today. The full report can be found on the Websites of the Vietnam Committee on Human Rights : 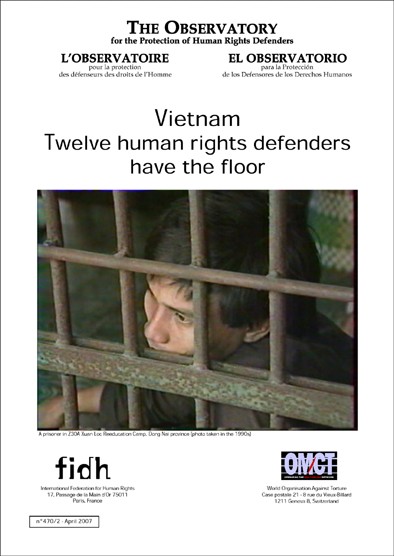 The Observatory
for the Protection of Human Rights Defenders

Paris-Geneva, April 23, 2007. The International Federation for Human Rights (FIDH) and the World Organisation Against Torture (OMCT), in the framework of their joint programme, the Observatory for the Protection of Human Rights Defenders, publish today their report following its international mission carried out in Vietnam.

The mission, organised in close co-operation with the Vietnam Committee on Human Rights, met with several prominent dissidents and religious leaders engaged in the struggle for the respect of human rights. The objective of the mission was to shed light on human rights defenders, whose situation has been dealt with since many years by the Observatory, by collecting their first-hand testimonies. The report aims at sensitizing the international community and public opinion on the state of freedom of expression and freedom of association in Vietnam, and the Observatory will use it as an advocacy tool in the framework of bilateral and multilateral relations between Vietnam and third countries.

Many of those met by the mission are members or supporters of the independent Buddhist church, the Unified Buddhist Church of Vietnam (UBCV), which was outlawed in 1981 and has been a constant target of the regime. The mission also met with writers, academics, dissidents Communist Party veterans and others involved in defending human rights and the struggle for democratic reform.

Several of those met by the mission have spent many years in prison, in connection with their human rights activities. Many have suffered the most extreme physical and mental privations, and even on release have been kept under surveillance and denied the fundamental rights to freedom of movement, expression and association. They have nevertheless maintained their determination and continued their struggle.

Decisive steps are necessary in order to foster an environment conducive to human rights and the rule of law. In particular, the Vietnamese authorities should notably :

– Immediately and unconditionally release all human rights defenders, political prisoners and prisoners of conscience detained for having legitimately and peacefully exercised their rights to freedom of opinion and expression, freedom of information and freedom of religion and belief ;

– Cease all forms of repression, including judicial and administrative harassment, against those who exercise their rights to freedom of opinion, freedom of expression, freedom of religion and belief and freedom of association and assembly in accordance with international human rights standards ;

– Allow the creation of free and independent media, including by abolishing Decree 56/2006 and Decision 71, reforming the Press Law, in particular articles 1, 2 and 15 and Chapter 5, and authorizing private newspapers and media ;

– Legally recognize the Unified Buddhist Church of Vietnam and all other non-recognized religious bodies in Vietnam ;

– Remove all obstacles to visits by international media and human rights groups to Vietnam to allow independent monitoring of the human rights situation ;

– More generally, fully respect the UN Declaration on Human Rights Defenders adopted by the General Assembly of the United Nations on December 9, 1998, especially its Article 1 and its Articles 12.1 and 12.2

– Ratify the UN Convention on Torture and other Cruel, Inhuman or Degrading Treatment and its Optional Protocol.

Moreover, the Observatory urges the European Union to implement Article 1 of the 1995 EU-Vietnam Co-operation Agreement, which founds cooperation on the respect of democratic principles and human rights and establish, on this basis, specific benchmarks for human rights improvements in the EU human rights dialogue with Vietnam. The EU should grant particular attention to the protection of human rights defenders in accordance with the EU Guidelines on Human Rights Defenders.