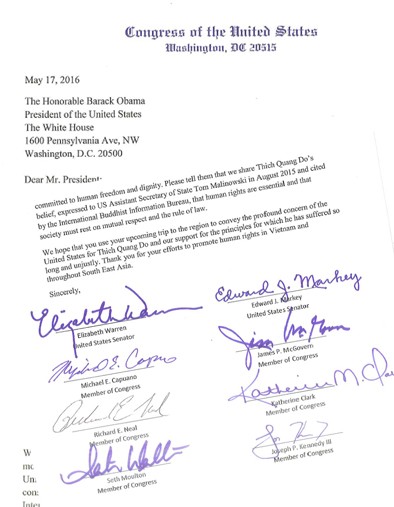 PARIS, 20 May 2016 (VCHR) – Eight prominent members of the US Congress have written a letter to US President Barack Obama calling on him to press for the release of Buddhist dissident Thích Quảng Độ in his upcoming visit to Vietnam. President Obama is scheduled to arrive in Vietnam on 22st May and will visit Hanoi and Saigon (Ho Chi Minh City). Human rights and religious freedom are reportedly on the agenda of his discussions with Vietnam’s communist leaders.

Mr. Võ Văn Ái, President of the Vietnam Committee on Human Rights and Director of the Paris-based International Buddhist Information Bureau expressed his warm thanks to the members of Congress: “Thích Quảng Độ has spent more than a third of his life in detention. I sincerely hope President Obama will heed this strong and moving appeal, and win back the long-awaited freedom for Thích Quảng Độ.”

Thích Quảng Độ, Patriarch of the non-recognised Unified Buddhist Church of Vietnam is currently under house arrest at the Thanh Minh Zen Monastery in Saigon. A 2016 Nobel Peace Prize nominee and outspoken dissident, Thích Quảng Độ has spent the past three decades in prison, internal exile and house arrest for his nonviolent advocacy of religious freedom and human rights.

The text of the letter is as follows:

We wish you well on your trip to South East Asia in May. We hope and expect that your presence in the region will contribute to its peace and stability.

It is with respect to Vietnam that we write you today. The Universal Declaration of Human Rights affirms that the peoples gathered in the United Nations respect fundamental human rights and the dignity and worth of the human person. Moreover, that this shared recognition is essential to promote the development of friendly relations between nations. Article 18 explicitly sets forth the right to religious liberty:

Everyone has the right to freedom of thought, conscience and religion; this right includes freedom to change his religion or belief, and freedom, either alone or in community with others and in public or private, to manifest his religion or belief in teaching, practice, worship and observance.

No one should be subject to coercion which would impair his freedom to have or to adopt a religion or belief of his choice.

We believe that the prolonged sequestering, sometimes called “pagoda arrest,” of the Buddhist monk, Thich Quang Do, violates these universally-recognized principles. The leader of the Unified Buddhist Church of Vietnam is an 87 year-old man and is recognized as a “prisoner of conscience” by Amnesty International, the International Federation for Human Rights, PEN International, and the Lantos Foundation for Human Rights. He has suffered exile, imprisonment, and detention almost uninterruptedly since 1982.

In your meetings with Vietnam’s President Tran Dai Quang, Prime Minister Nguyen Xuan Phuc, and the General Secretary of the Communist Party Nguyen Phu Trong, with whom you met last summer, we urge you to call for the immediate release of Thich Quang Do. We ask you, as our President, to reinforce to your Vietnamese interlocutors that the United States is committed to human freedom and dignity. Please tell them that we share Thich Quang Do’s belief, expressed to US Assistant Secretary of State Tom Malinowski in August 2015 and cited by the International Buddhist Information Bureau, that human rights are essential and that society must rest on mutual respect and the rule of law.

We hope that you will use your upcoming trip to the region to convey the profound concern of the United States for Thich Quang Do and our support for the principles for which he has suffered so long and unjustly. Thank you for your efforts to promote human rights in Vietnam and throughout South East Asia.