Home / Latest posts / U.S. Commission on International Religious Freedom urges the US to designate Vietnam as “Country of Particular Concern” for egregious violations of freedom of religion or belief

U.S. Commission on International Religious Freedom urges the US to designate Vietnam as “Country of Particular Concern” for egregious violations of freedom of religion or belief 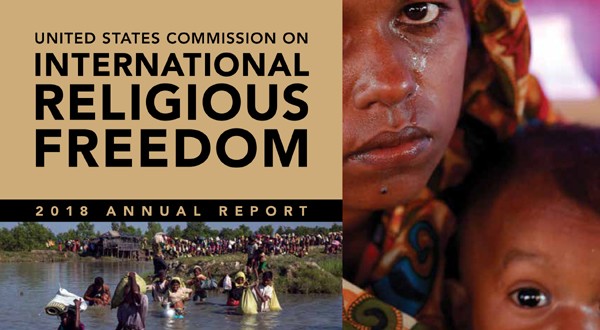 PARIS, 25.4.2018 (VCHR) –The Vietnam Committee on Human Rights (VCHR) welcomes the 2018 Annual Report issued by the US Commission on International Religious Freedom (USCIRF) on Wednesday, and its recommendation that Vietnam be designated as a “Country of Particular Concern” (CPC). Under the 1998 US International Religious Freedom Act, CPC designation applies to “any country whose government engages in or tolerates particularly severe religious freedom violations that are systematic, ongoing, and egregious”. A total of 16 countries were recommended by USCIRF for CPC designation this year.

USCIRF, which celebrates its 20th anniversary this year, has consistently recommended that the US State Department designate Vietnam as a CPC every year since 2002. Vietnam was placed on the CPC blacklist in 2004 and 2005, but removed in 2006. USCIRF has expressed regrets that the US lifted the CPC designation too soon, resulting in backsliding and continuing abuses of freedom of religion or belief in Vietnam.

“USCIRF’s report confirms our assessment that violations of the right to freedom of religion or belief are escalating in Vietnam. The new Law on Belief and Religion, which came into force in January, should provide a framework to protect religious freedom. But on the contrary, Vietnam is using the law as a tool to criminalize legitimate religious activities” said Võ Văn Ái, VCHR President. “Religious communities are true voices of civil society, who are simply asking for the right to live their faith in peace. Yet they are subjected to harassments, violence and detention. CPC designation is critical to maintain international focus on Vietnam’s egregious, ongoing abuses of religious freedom and human rights”.

According to USCIRF’s findings, Vietnam’s “ever-tightening media censorship, control over the internet and social media, and overall willingness to quash—sometimes violently—perceived criticism and dissent” have led in 2017 “to what human rights advocates characterized as an outright assault on freedom and universal human rights in Vietnam”.

“The use of plain-clothes thugs, many of whom likely work for a government security agency, to commit acts of violence against religious believers and others has risen in 2017,” the report said, adding that “systematic, ongoing, egregious religious freedom violations demonstrate why constitutional and other legal measures that purport to protect freedom of religion or belief are not sufficient when government and nonstate actors violate the rule of law with impunity and disregard international human rights standards”.

Many individuals and groups are targeted by the Vietnamese government because of their faith, ethnicity, advocacy for democracy, human rights or religious freedom, or desire to main independent of Communist government control, according to USCIRF, such as the Unified Buddhist Church of Vietnam (UBCV), independent Cao Dai, Hoa Hao and Khmer-Krom Buddhists, Montagnards, Hmong, Falun Gong practitioners and followers of the Duong Van Minh sect.

Specifically regarding the UBCV, USCIRF said that the authorities interfered with celebrations of Vesak Day (Birth of Buddha), interrogated leaders of the UBCV-affiliated Buddhist Youth Movement (Gia đình Phật tử) and warned local Buddhists against attending UBCV pagodas. Police disruptions of BYM’s summer camps in 2017 were worse than in previous years, it said, expressing concern that UBCV leader Thích Quảng Độ “has spent the last 19 years under house arrest, but nearly 30 years total in detention when accounting for his time in prison and under previous house arrest. Authorities have denied him the ability to travel to Hue to obtain medical care.”

“USCIRF’s concern for the plight of Thích Quang Độ is very welcome” said Võ Văn Ái. “At its 20th Anniversary event in Washington last week, USCIRF Vice Chairwoman Kristina Arriaga announced she is officially adopting Thích Quảng Độ as a prisoner of conscience. We hope that this strong focus on Thích Quảng Độ will lead to his release at last”.

Commenting on Vietnam’s Law on Belief and Religion (which had not yet come into force during the reporting period), USCIRF said it was “not consistent with international human rights standards such as the UN International Covenant on Civil and Political Rights to which Vietnam is party”. USCIRF added that religious individuals and organizations had expressed concern that the law and its implementing decrees (government guidelines on the interpretation and enforcement of the law) are “antagonistic towards religion”.

——————-
Created under the 1998 International Religious Freedom Act, USCIRF is an independent, bipartisan government advisory body that monitors religious freedom worldwide and makes policy recommendations to the US President, Secretary of State, and Congress. Under the International Religious Freedom Act, the U.S. may impose a series of measures, ranging from travel restrictions to economic sanctions, on countries designated as CPCs.