PARIS, 30th November 2017 (VCHR) – The Vietnam Committee on Human Rights (VCHR) strongly protests the condemnation on appeal of prominent blogger and human rights defender Nguyễn Ngọc Như Quỳnh (aka Mẹ Nấm – Mother Mushroom) to ten years in prison by a court in Nha Trang today. The court upheld the sentence pronounced against her on 29 June 2017 on charges of “propaganda against the state” (Article 88 of the Criminal Code). Her mother and friends who came to support her were assaulted by plain-clothed security agents outside the courthouse. 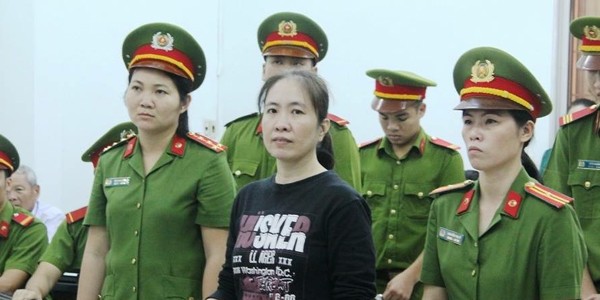 This unfair sentence, which comes on the eve of the EU-Vietnam human rights dialogue, was pronounced at the conclusion of a hearing which fell far short of international standards, in particular the right of defence. Last Sunday, Như Quỳnh’s lawyer Võ An Đôn was suddenly and arbitrarily disbarred by the local Bar Association and prevented from defending her. Moreover, the charges against her are based on vaguely-worded provisions in the Vietnamese Criminal Code which have been widely condemned by the international community as being grossly inconsistent with the United Nations’ International Covenant on Civil and Political Rights (ICCPR) to which Vietnam has been state party since 1982.

The UN Working Group on Arbitrary Detention condemned the detention of Nguyễn Ngọc Như Quỳnh (20 May 2017) as an act aimed at “restricting her activities as a human rights defender” in violation of international law. The VCHR is also gravely concerned by reports from her family that Như Quỳnh’s health has deteriorated in prison.

“Vietnam accuses her of acts that are nothing other than the basic exercise of the right to free expression. All citizens have the right to care about public affairs and the future of their country” said VCHR President Võ Văn Ái. “This courageous woman’s real “crime” is that of identifying Hanoi’s strategy of perpetuating a climate of fear, and she is paying a high price for this today”.

As early as 2011, Như Quỳnh denounced this fear created by systematic political repression: “the fear inside each person’s hearts, fear that is slowly, inexorably stifling our vitality and our very future. Dispelling this fear is the most urgent challenge we face”. Her sentence today, and the 7-year sentence of blogger Nguyễn Văn Hóa last Monday are clear examples of this strategy, which is aimed not to sanction real crimes, but to stifle all free expression of legitimate concerns about the problems of Vietnamese society today.

Detained since October 10, 2016, Nguyễn Ngọc Như Quỳnh is one of the very first human rights defenders in Vietnam to have used the Internet and social media to document human rights violations committed by the Vietnamese authorities. Since her first arrest in 2009, she has relentlessly criticized the Government on a wide range of social and political issues.

In April 2016, she addressed the Government’s mishandling of serious water pollution problems and the subsequent mass fish deaths caused by toxic waste discharged by the Taiwanese company Formosa Plastics in three coastal provinces. In an important document entitled “Stop Police Killing Civilians” based on articles published in the official press, Như Quỳnh exposed numerous incidents of police brutality and torture that resulted in the death of several individuals while in custody.

Previous Vietnam: EU must use upcoming rights dialogue to demand an end to crackdown on dissent
Next European Parliament condemns the deterioration of civil and political rights in Vietnam