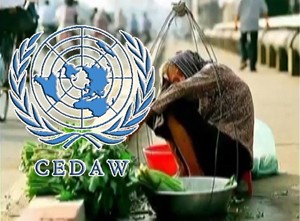 GENEVA, 9 July 2015 (VCHR) – As the UN Committee on the Elimination of Discrimination against Women (CEDAW) reviews the case of Vietnam at its 61st Session in Geneva, Vo Van Ai, President of the Vietnam Committee on Human Rights (VCHR) expressed grave concerns about persisting gender discrimination and violations of womens rights in Vietnam. He presented the UN experts with a an alternative report prepared jointly with the FIDH, and called on the UN to press Vietnam to make concrete steps towards reform.

Vietnam aceded to the CEDAW Convention in 1982. Mr. Ai regretted that “Thirty-three years later, Vietnamese women are still not aware of their fundamental freedoms and rights”.

“Vietnams country report to CEDAW describes a faultless record in promoting womens rights, and blames any shortcomings on its lack of resources” said Mr. Ai. “Our report reveals a completely different reality. Women in Vietnam today are the victims of a toxic mixture of economic liberalisation and political repression. The government has created a climate of fear in which women cannot effectively defend their rights. Not only does the government neglect this most vulnerable polulation, but it represses all those who try to stand up for womens rights”.

The VCHR and FIDH Joint Alternative Report notes that the main obstacle to the realization of womens rights is not the lack of resources but the political structure of the one-Party State, with its lack of transparency and political freedoms and the pervasive control of the Communist Party of Vietnam (CPV). There are no independent civil society organizations, no free trade unions, no free press, independent judiciary or mechanisms through which women may express their grievances and seek remedy. Under Vietnams broadly-defined “national security” laws, acts perceived to “infringe upon the interests of the State” carry heavy prison sentences. Women who are victims of abuses are therefore afraid to take action to prosecute State organs, or speak out publicly to defend their rights. Recently, Police violence, harassments, intimidation and even sexual assaults on women human rights defenders, bloggers and activists has increased alarmingly, and women imprisoned for human rights advocacy are subjected to extremely harsh detention conditions.

Gender inequality in Vietnam, the report reveals, is exacerbated by government control mechanisms such as the household registration permit or hộ khẩu. This compulsory permit is a prerequisite for all administrative demarches, such as enrolling children in school, gaining access to health care and other public services, and without it, people are virtually illegal citizens. Because local Communist Party cadres have full powers to issue or withdraw the hộ khẩu, power abuse and corruption is widespread. Rural-to-urban migrants, 70% of whom are women, do not have hộ khẩu. They must pay higher prices for water and electricity, and are excluded from government aid and public services. Children born overseas to women who are victims of trafficking for sexual exploitation or labour are denied hộ khẩu and citizenship rights on returning to Vietnam.

The report identifies land rights, forced evictions and state confiscation of land as major source of womens rights abuse. In Vietnam, people do not own their land, but are issued with “Land User Rights Certicates” (LURCs) which the State can forcibly recover it at any time. Only 10.9% of LURCs for agricultural land bear the names of both husband and wife. Widows therefore find themselves expropriated without the slightest compensation when their husband dies. In a vast rural protest movement, known as “Dân Oan” (Victims of Injustice) rural women march to Hanoi and Ho Chi Minh City and camp outside the Complaints Offices to demand justice. Vietnam has responded by violently disbanding the protesters and passing Decree 38 banning demonstrations outside public buildings, causing a number of women to self-immolate in despair.

Mr Vo Van Ai told the UN experts that Vietnams policy of “đổi mới” – economic liberalization under authoritarian control – has seriously impacted gender rights. Vietnamese women are exposed to new forms of violence, and the introduction of “user fees” for health and education has penalized women significantly, especially in the rural areas where 70% of the population live. Vietnam has adopted a policy named “socialization” which is tantamount to a privatization of education, obliging parents to share the costs of tuition, school repairs, textbooks and food. As a result, many poor pupils, especially girls, drop out of school at a very early age. This especially affects girls from the ethnic minorities, 20% of whom have never attended school.

As Vietnam races to compete in the global market, worker rights – especially those of women – are routinely sacrificed for profit. Minimum wages in Vietnam, which are fixed by the government, are amongst the lowest in Southeast Asia, and many foreign companies are now re-localizing to Vietnam to take advantage of its low-paid and submissive work-force. Womens wages are merely 80% those of men in the formal sector, and 50% in the informal sector. Women are in poorer health than men, work longer hours and receive less bonuses. But they rarely dare to complain because the sole labour union, the Vietnam Conferedation of Labour, protects the employers rather than workers, and the right to strike is severely restricted in Vietnam.

Trafficking of women for labour or sexual exploitation is increasing alarmingly. Young girls trafficked to China or Cambodia frequently have ther passports confiscated and are treated as slaves. One young girl in China was reportedly raped by 47 men on her first night of captivity.

Gender discrimination, according to the VCHR/FIDHs findings, is perpetuated in Vietnam by government policies and practices. In the sole textbooks used in Vietnams schools, women are stereotyped as home-makers or market vendors, with men as doctors and engineers. Prostitutes or women infected with HIV/AIDs are stigmatized as perpetrators of “social evils” and placed under the charge of the governments “Department of Social Evils” and “Social Evils Police Prevention squads.” Vietnams “2-child policy”, abandonned in theory but active in practice, has resulted in widespread abortions because of son preference”, and because of the lack of contraception advice for unmarried couples, abortion has become the principal form of “family planning”. Vietnam has one of the highest abortion rates in the world, with over 40% of pregnancies ending in abortion.

Mr. Vo Van Ai concluded by calling on Vietnam to “initiate political reforms” and “create a climate of diversity and political pluralism so that all women may participate in the process of social, economic, intellectual and political development”. Amongst specific 25 recommendations, the VCHR/FIDH report called on Vietnam to authorize the establishment of independent womens NGOs and civil society movements, a free press and free trade unions. Such institutions would provide “safety nets” to expose discriminatory practices and provide alternative mechanisms to protect womens rights, said Mr Ai.