GENEVA, 14 March 2018 (VCHR) – Speaking on behalf of the Paris-based Vietnam Committee on Human Rights (VCHR) and Agir Ensemble pour les Droits de l’Homme at the UN Human Rights Council in Geneva, VCHR President Võ Văn Ái denounced the escalation of repression against human rights defenders, bloggers, civil society activists and religious followers, and the use of restrictive legislation to constrain human rights and democratic freedoms in Vietnam. The UN Human Rights Council is meeting at its 37th Session from 26 February to 23 March 2018.

“Vietnam claims there are no political prisoners, only people who have “violated the law.” But the fact is that Vietnam’s domestic legislation is incompatible with international law,” Võ Văn Ái said before the Human Rights Council today. “Instead of developing the rule of law, Vietnam is enforcing the rule by law, by adopting a whole arsenal of legislation that nullifies human rights”. Of particular concern are vaguely-worded “national security” provisions in the Criminal Code which are systematically invoked to detain political and religious dissidents, human rights defenders and civil society activists. Despite repeated appeals by the international community, Vietnam refused to review these national security provisions in the amended Criminal Code that came into force in January 2018.

Repression against civil society is increasing, said Mr. Ái, with an “escalation of arrests and arbitrary convictions, growing police brutality, ill-treatment in police custody and increased use of the death penalty”. Over the past 14 months alone, 62 civil society activists have been arrested and condemned to harsh prison sentences, such as Dr. Hồ Văn Hải, arbitrarily sentenced to 4 years in prison and 2 years house arrest for “simply denouncing the toxic effects of the Formosa waste spill which devastated Vietnam’s central coastal waters. Bloggers Mẹ Nấm and Trần Thị Nga, sentenced to 10 and 9 years respectively, were transferred to prisons more than 1000 kilometres from their homes to prevent them receiving regular visits from their families. Both are mothers of young children.

“Dissidents and civil society activists in prison are subjected to a particularly harsh regime. Not only are they sentenced at unfair trials, often without access to defence, but also suffer inhumane detention conditions, lack of medical care and denial of regular visits”, said Võ Văn Ái. “This cruel treatment is a violation of the UN Convention on Torture which Vietnam ratified – without the slightest intention of respecting, as it has done with all other UN human rights treaties.” 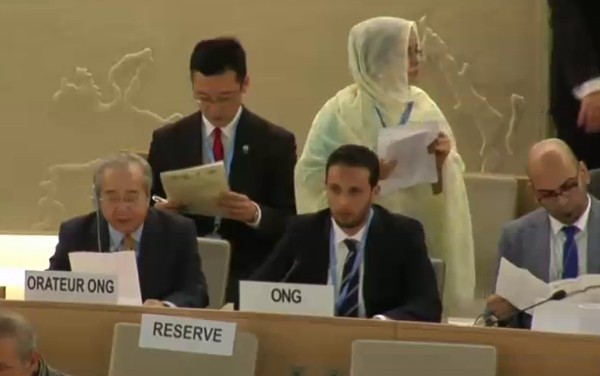 Vietnam accepted recommendations by the international community to revise “national security” provisions to bring them into line with international human rights law. However, in the amended Criminal Code, which came into force in January 2018, “Vietnam made no changes to these crimes except their numbers, and even added new punishments for the “preparation” of such crimes,” he said.

In his statement to the Human Rights Council, Mr, Ái expressed his deep concern for the situation of freedom of religion or belief in Vietnam. According to Dr. Ahmed Shaheed, UN Special Rapporteur on Freedom of Religion or Belief, Vietnam is 5th on the list of countries with the highest number of communications on violations of religious freedom, and is among 10 countries listed globally as “having the most negative attitude towards freedom of religion or belief in the public and private domain”. In January 2018, immediately after Vietnam’s new Law on Belief and Religion came into force, ten Hoa Hao Buddhists were sentenced to prison terms ranging from two to 12 years.

Under the Law on Belief and Religion, members of religious communities that are not registered with the state are especially vulnerable. The law requires mandatory registration and imposes strict controls on all religious activities. Religious communities which cannot, or choose not to register with the state risk grave repression. One salient example is the independent Unified Buddhist Church of Vietnam (UBCV), whose leader Thích Quảng Độ has spent 35 years in prison and under house arrest because he refuses to register the UBCV.

Mr Võ Văn Ái concluded his statement by calling on Vietnam to “release all prisoners of conscience and invite the UN Special Rapporteurs on human rights defenders and freedom of opinion and expression to visit the country as soon as possible”.

Previous Shrinking Spaces: Assessment of the Human Rights Situation in Vietnam during the 2nd Cycle of the Universal Periodic Review
Next Hmong Christians assaulted in Vietnam: repression continues under new Law on Belief and Religion