At Vietnam’s third UPR on 22 January at the 32nd Session of the UPR Working Group, 291 recommendations were made by 121 member states, and 22 states submitted questions in advance. The draft report was adopted on Friday 25th January, and Vietnam must report back to the UPR Working Group before the 41st Session of the UN Human Rights Council in June-July 2019 to state which recommendations it rejects or accepts to implement over the next four years before its fourth UPR cycle.

The 291 recommendations highlighted a wide range of issues such as detention and harassment of bloggers, journalists and human rights defenders, the widespread use of the death penalty, violations of freedom of expression, association, assembly and freedom of religion or belief, the rights of women and children, human trafficking, torture, worker rights and due process of law. Several states observed that a “harsh crackdown on individuals peacefully expressing dissent” had intensified in 2018. 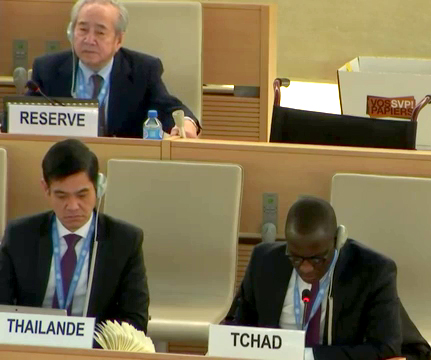 “These recommendations give a stark appraisal of the widespread human rights abuses endured by Vietnamese citizens in all aspects of their daily lives. The government used the pretext of “national security” and “terrorism” to explain the ongoing crackdown. But the international community is not dupe. The scores of civil society activists sentenced recently to harsh prison terms in Vietnam are not clearly terrorists, but ordinary people calling for the respect of rights, freedoms, and democratic principles,” said VCHR President Vo Van Ai.

The head of the Vietnamese delegation, Deputy Foreign Minister Le Hoai Trung, justified the ongoing crackdown by invoking “new challenges facing Vietnam: terrorism, anarchy and abuse of religions”. He warned that “individuals and organizations who harbour extremism and prejudices” were “spread[ing] untruths” to threaten national security and prevent the enjoyment of human rights.

Specific questions on issues such as torture, repression of dissidents or abuses freedom of religion or belief (FoRB) were flatly dismissed by the Vietnamese delegation, which included officials from the Ministry of Foreign Affairs, Ministry of Justice, Ministry of Information and Communications, Government Committee for Religious Affairs, Ministry of Public Security, Supreme People’s Court and the Ministry of Labour, Invalids and Social Affairs. Belying extensive evidence to the contrary, the Ministry of Public Security’s representative stated categorically that “there is no such thing as so-called arrests and detention of human rights defenders for the peaceful expression of their opinions.” “Torture is forbidden by law in Vietnam, and therefore does not exist”, said the Supreme People’s Procuracy official.

Below are some of the main issues of concern raised during the review:

Vietnam declared that it had adopted or amended 96 key legal documents related to human rights since its last UPR in 2014. However, states including Slovakia, Switzerland, Germany, Canada, New Zealand, Norway and France observed that many of these laws imposed inadmissible restrictions on human rights. The Netherlands called on Vietnam “to amend within one year” its Criminal Code, the Cybersecurity Law, Press Law and Internet Decree 27/2018 to bring them into line with the ICCPR.

Many states called on Vietnam to revise or abrogate broadly defined “national security” clauses in the Criminal Code to ensure that they are not used to “prevent peaceful debate and dissent”, in particular Articles 109, 117 and 331[2] (on “activities aimed at overthrowing the people’s administration”, “making, storing and disseminating information against the SRV”, and “abusing democratic freedoms to encroach on the interests of the state” which criminalize the expression of peaceful opinions or beliefs. States also called for the release of all persons unlawfully detained under these laws for the expression of peaceful views, such as Tran Thi Nga and members of the Brotherhood for Democracy (USA).

Freedom of Expression Online and Offline

Concern on “a growing trend in arbitrary arrests and detention, intimidation, harassment and attacks against human rights defenders” (Slovakia) and “shrinking spaces for civil society” (Belgium, France) was echoed by many states. They urged Vietnam to release all human rights defenders, bloggers, political and religious activists imprisoned for exercising their right to freedom of expression (Iceland, Poland, Czechia); prosecute all persons guilty of violence or intimidation against them (Luxembourg, Argentina); and review regulations impeding the operation of CSOs (Ireland).

Freedom of Religion or Belief (FoRB)

Nine states urged Vietnam to review the 2016 Law on Belief and Religion (effective since January 2018) to enable all religious groups to practice freely; reduce administrative obstacles to peaceful religious activities; cease harassment against religious minorities; remove undue restrictions on access to and clergy for those in prison; and release all those detained on account of their religious beliefs (Brazil, Canada, Croatia, Poland, Angola, Italy, USA, Kenya, Laos).

This subject received the most recommendations, from 26 states, calling on Vietnam to ratify the ICCPR’s 2nd Optional Protocol aiming at the abolition of the death penalty; initiate a moratorium on executions and consider fully abolishing the death penalty; eliminate the death penalty for non-violent crimes, including national security offences; provide official statistics regarding death sentences and executions. Responding to these concerns, the representative of Vietnam’s Ministry of Justice said that Vietnam will not publicize data concerning the death penalty, since they are considered state secrets. But she added that executions in Vietnam “have always been transparent and public”. She did not explain why executions are public, whereas statistics are state secrets.

The 291 recommendations covered a range of other issues, including authorizing the establishment of independent trade unions, guaranteeing worker rights and ratifying ILO Conventions 87, 98 and 105; reforming the legal system to ensure the right to a fair trial, access to lawyers and due process of law; issuing standing invitations to UN Special Rapporteurs; protecting LGTBI rights; enacting laws to provide for freedom of assembly and peaceful demonstration (in June 2018, hundreds were arrested in nationwide demonstrations protesting a law on Special Economic Zones and the Cyber Security Law); and moving towards political plurality and democracy (Czechia).

[1] Article 173.5 of the 2015 amended Criminal Procedures Code provides for indefinite pre-trial detention of national security offenders (following a period of 4 months which may be extended three times, “the head of the Supreme People’s Procuracy shall decide to maintain detention until the investigation closes”); the 2015 amended Criminal Code provides for “special circumstances” concerning trials of suspected national security offenders (Article 25: trials may be held in secret, Article 28: non-application of the time limit for criminal prosecution)

Previous VCHR proposes strategies for advancing Freedom of Religion of Belief in Vietnam at the Danish Parliament in Copenhagen
Next Vietnam: Human rights dialogue held amid heightened crackdown