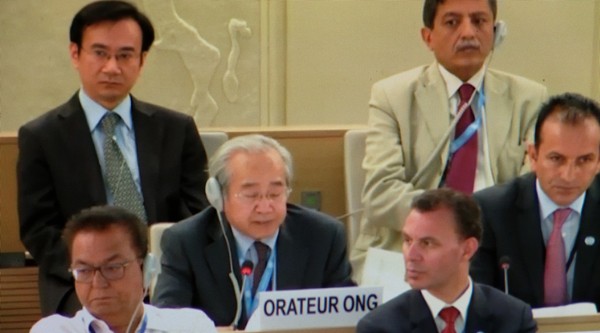 GENEVA, 27 June 2018 (VCHR) – Speaking at the UN Human Rights Council today on behalf of the Vietnam Committee on Human Rights (VCHR) and its partner Agir Ensemble pour les Droits de l’Homme, VCHR President Võ Văn Ái denounced the violent suppression of peaceful demonstrations and the adoption of a restrictive new Cybersecurity Law in Vietnam. The UN Human Rights Council is meeting in Geneva for its 38th Session from 18 June to 6 July 2018.

“In Vietnam’s one-Party state, where there are no opposition parties and no free press, peaceful demonstrations and the Internet are the only means people have to freely express their views”, Võ Văn Ái told the Council, describing the government’s ongoing assault on all forms of free expression, including the right to peaceful demonstration.

Since 9th June, massive protests have shaken the country, notably in Ho Minh City, Hanoi, Nha Trang and Binh Thuan province. Thousands of people have taken to the streets to denounce a draft law that would allow foreign investors to lease land for periods of 99 years in three Special Economic Zones (SEZs). For many Vietnamese, this law would give China a golden opportunity to establish a long-term presence in Vietnam at a time when the Chinese authorities are taking a particularly aggressive stand on sino-vietnamese territorial disputes in the South China seas (called the Eastern Sea by the Vietnamese).

Vietnam reacted to these demonstrations with a massive and brutal crack-down. Police and plain-clothed security agents beat and arrested both protesters and passers-by, and deployed Long Range Acoustic Devices (LRADs) to forcibly disband the protests. Temporary detention centres were set up (such as Tao Dan Park in Ho Chi Minh City) where Police conducted interrogations. Those released report that they “could hear screams of other activists being beaten by Police” in adjacent rooms. Some 300 people remain in detention, and dozens now face criminal charges for alleged “breaches of public order”.

“These nationwide protests are not just about Chinese encroachment” said Mr. Võ Văn Ái. “Many demonstrators were also denouncing the new cybersecurity law. This unrest is a sign of the people’s need to speak out freely, and their deep frustration to be living in a society where their only right is to keep silent”.

In his statement to the UN, Mr. Ái declared that the cybersecurity law “deals a severe blow to freedom of expression online. It grants the government sweeping powers to monitor online activity and requires social media platforms to store the personal data of its users in Vietnam and remove content deemed “offensive” by the government within 24 hours”.

The law, which was adopted by the National Assembly on 12th June and comes into force in January 2019, also prohibits Internet users from using social networks or the Internet to “infringe upon state interests” or spread “false information.” These vague, catch-all charges are routinely invoked by the government to muzzle all freedom of expression.

In fact, the new Cybersecurity law not only concerns users of social media but all individuals and companies who access the Internet. For example, companies offering online services could be obliged to share the personal data of their clients, including bank accounts, hotel bookings travel itineraries or online purchases with the authorities if they are so requested.

“Potentially, this law gives the authorities carte-blanche to censor, monitor, spy and track down anyone in their sights, whether they be Vietnamese or foreigners in Vietnam”, said Mr. Ai.

He called upon the UN Human Rights Council to firmly condemn the Vietnamese government, and press Vietnam to “immediately release all those arrested in the demonstrations, and prosecute Police and security agents responsible for excessive use of force, arbitrary detention, or ill-treatment in custody”.

Mr. Võ Văn Ái called on Vietnam to invite the Special Rapporteurs on Freedom of Opinion and Expression, Peaceful Assembly and Association and the Situation of Human Rights Defenders to visit Vietnam without delay to examine the situation in-situ.

Previous New #FoRBDefender Movement Calls on People of all Faiths and None to Declare: “Believe it or not, it’s my Right!”
Next Freedom of Religion or Belief & Human Rights: Vietnamese and Tibetan Buddhism under threat