My name is Marietje Schaake, I am a Member of the European Parliament from the Netherlands.

I am very sorry I cannot join you today in California today but hopefully I can contribute to your discussion through this short video message.

In the European Parliament my focus is on foreign affairs and the EU’s digital agenda, in particular human rights and Internet Freedom.

Over the last few months I have been actively involved in the EU’s response towards the monumental changes we have seen in Tunisia, Egypt and Libya. Of course our attention is still very much needed, in particular regarding Syria were citizens are killed by the government every day.

The important role of social media in organizing protests on the Arab street has been widely celebrated. And indeed by using Facebook, Twitter and mobile phones especially the youth in these countries were able to connect, organize and push for change.

However, governments have also become very skilled in using modern technologies to track and trace human rights defenders, activists or opposition member. Technologies have become as effective as weapons. Over the past months I have spoken to activists who were confronted with their own e-mails, text messages, phone conversations during their detentions. Others were tortured for their passwords.

Unfortunately we can expect that repressive regimes show now restraint in silencing critical voices in their societies, but we should be very concerned if U.S. and European companies provide these regimes with the tools to violate basic human rights. We cannot accept this.

As we speak a team of Italian employees are in Damascus, building a monitoring centre for al-Assad, providing him 100% control over all internet-traffic. Will Syrian protesters still be able to upload videos of crimes on YouTube?

In the European Parliament I am trying very hard to get Internet Freedom on the agenda. Globally.

As the battle for human rights has moved online the EU should do much more in becoming a stronger and more credible defender of these rights by setting a clear and ambitious agenda.
Citizens all over the world should have unrestricted access to the internet and other information and communication technologies.

The free flow of information and ideas is one of the fundamental pillars of democracies. In a globally connected worlds citizens should be able to engage in dialogue and inspire each other to improve the situation in their own countries.

In promoting this agenda the EU should use its economic power to have political impact. In my work in the International Trade committee of the European Parliament I focus on conditionality clauses in trade agreements. Trade with the EU should only be possible if basic human rights standards are met. Yes, in that field there is some work to do for the European Union.

Today we pay tribute to MR. THICH QUANG DO who is a symbol of ongoing the struggle for human rights in Vietnam.

His continued dedication to promoting and defending human rights should serve as an inspiration for a new generation.

A generation that needs to find new ways and use new tools in our changing world to address both existing and new problems.

In a globally connected world geographic distances have become less important, creating new opportunities. But that also means that we cannot ignore problems that are far away from our own homes.

Therefore I can assure you that the European Parliament will be a staunch defender of global human rights, also in Vietnam.

Thank you very much.

Previous UBCV : Thich Quang Do: Message to the Ceremony of Prayers for World Peace, Security in South East Asia and the Territorial Integrity of Vietnam (Video)
Next International personalities and over 4,000 Buddhists celebrate the consecration of Most Venerable Thich Quang Do Fifth Supreme Patriarch of the Unified Buddhist Church of Vietnam 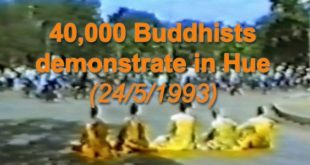 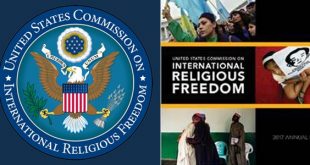 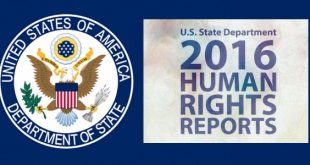