GENEVA-PARIS-BANGKOK, 20 February 2012. The International Federation for Human Rights (FIDH) and its member league the Vietnam Committee on Human Rights (VCHR) urge the Vietnamese authorities, when they go before the UN Committee on Elimination of Racial Discrimination this week, to make firm commitments to address persistent discriminatory practices against religious and ethnic minorities and end restrictions on their fundamental freedoms.

In a 30-page alternative report entitled “Violations of the Rights of Ethnic and Religious Minorities in the Socialist Republic of Vietnam”, the Vietnam Committee on Human Rights raised serious concerns on Vietnam’s implementation of the International Convention on the Elimination of All Forms of Racial Discrimination (ICERD) to which it acceded to in 1982. The CERD is examining the Vietnamese government’s combined 10th and 14th periodic reports on February 21-22 in Geneva. This is only Vietnam’s fourth reporting to CERD and the first in almost a decade, despite its obligations under the Convention to report to CERD every two years after its first report. 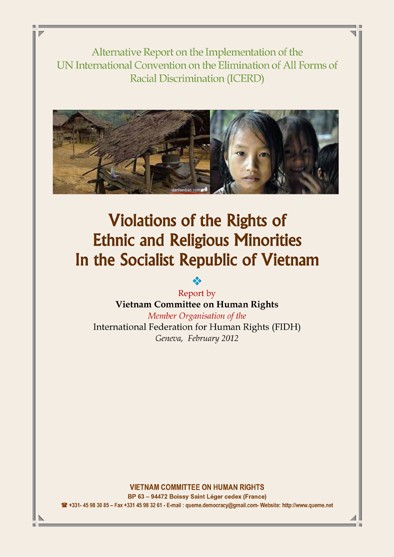 VCHR’s report, which will be presented to the CERD today (Monday 20th February) by VCHR President Vo Van Ai, details a range of violations of the rights of and discrimination against ethnic minorities in both law and practice, despite constitutional prohibition of discrimination and Vietnam’s obligations under the human rights conventions it has ratified. The indigenous Montagnards and the Hmongs are among the ethnic groups who have borne the brunt of the Vietnamese government’s discriminatory policies.

The report points to the wide disparities between the majority Kinh people and the various ethnic minorities in terms of their enjoyment of economic, social and cultural rights, within a one-party authoritarian system that also denies citizens basic civil and political rights to participate in decision-making that affect their livelihood and standard of living. Wealth disparities are “increasingly alarmingly” and government programmes supposedly aimed at reducing poverty “often include campaigns to eradicate the culture, traditional lifestyle, religious beliefs and practices of minority peoples, resulting in even greater marginalization,” the report said.

“Vietnam’s economic growth has often been touted by the government internationally as a human rights ‘achievement’; a closer look at disaggregated data, however, would reveal that the benefits of such growth has not been evenly enjoyed by the wider population, especially among ethnic minorities, who remain far behind their Kinh counterparts in areas such as health, education, and employment,” said Souhayr Belhassen, President of FIDH. “This cannot be attributed solely to ‘market forces’ but is in fact also a result of the implementation of a range of discriminatory institutional, legislative and policy tools for control that are inconsistent with international human rights standards.”

Activities of ethnic minorities, including their religious practices, are subject to extensive and arbitrary controls by numerous government regulations, decisions and directives, which in practice also seriously undermine the fundamental civil rights, such as the rights to freedom of expression, peaceful assembly and association; to freedom of movement and residence; to leave and return to one’s country; and to own property and to inherit. Members of religious minority groups such as the Unified Buddhist Church of Vietnam (UBCV), the Hoa Hao, Cao Dai and Khmer Krom Buddhists are subjected to systematic repression including imprisonment, torture, house arrest, police surveillance, intimidation and harassments in all aspects of their daily lives.

The judiciary is not independent in Vietnam and is thus unable to adjudicate against discriminations and guarantee the right to equality before the law. In one glaring example of the judicial persecution of ethnic minorities, the VCHR report stated that “more than 350 Montagnards have been sentenced to long prison sentences since 2001 for participating in demonstrations, attempting to flee the country or attending prayers in “unrecognized” house churches”. In just one trial in April 2011, eight Montagnards were sentenced to a total of 75 years in prison and 24 years house arrest.

“As our report reveals, ethnic and religious minorities in Vietnam suffer serious violations of their political and economic rights, such as expropriation from ancestral lands, population displacement, State-sponsored migration of Kinh people into minority regions, religious persecution, arbitrary arrest and disappearances” said Vo Van Ai, President of the VCHR and recent laureate of the Società Libera Special Prize for Freedom.

Mr. Ai also stressed the importance of political reforms in addressing these problems. “For the past 36 years, a 3-million minority of Communist Party members has imposed a policy of discrimination against the majority of 89 million people in Vietnam. It is time that this discrimination is put to an end, and the Party and Government effectively protect the rights of all their citizens, and guarantee the freedoms of ethnic and religious minorities in Vietnam”.

FIDH and VCHR call on CERD to urge the Vietnamese government to:

– Implement urgent reforms in Vietnam’s legal system to combat racial discrimination and bring domestic laws and practices into line with the international human rights instruments which it has ratified;

– Take effective steps to eradicate misperceptions and negative stereotypes that stigmatise and marginalise ethnic minorities; and

– Recognise the competence of the CERD Committee to receive individual complaints from victims of racial discrimination in accordance with article 14, paragraph 1, of the Convention.